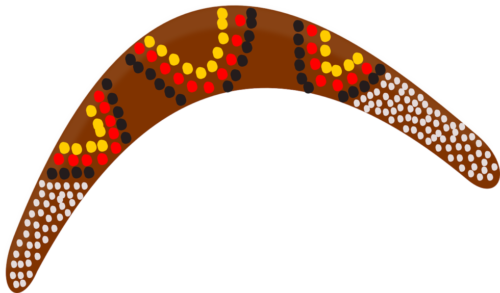 Inventions are often taken for granted as we sometimes use them every day to help us stay healthy or make our lives easier.

Australian inventions have assisted with everyday activities such as hanging out the clothes to dry on a rotary washing line, putting food into the fridge so it keeps fresh, drilling a hole in the wall so you can hang a picture, taking antibiotics to help a throat infection and hearing people laugh if you were born deaf.

Lawrence Hargrave, who achieved the first powered flight in 1894 with four box kites, was said to be symbolic of many Australian inventors and Australian innovation; ‘He was interested in the invention, not the money to be made’ (Sydney Morning Herald, 26 January 2005).

So why is Australia such a nation of inventors? Much of our inventiveness has been due to the nature of our geography and isolation. In 1879, Australians developed a way for ice to be manufactured artificially, enabling us to export meat to Great Britain on refrigerated ships. In 1906, the surf lifesaving reel was designed by Lyster Ormsby and built by Sgt John Bond to allow a lifesaver wearing a vest with a rope attached to reach a distressed swimmer. In 1929, Alfred Traeger built a pedal-powered radio at the request of the Rev. John Flynn, as the communications for the Royal Flying Doctor Service.

Another reason is that as a nation, we recognise the value of a culture that promotes new ways of doing things. Australia’s Commonwealth Scientific and Industrial Research Organisation (CSIRO) fosters Australian invention. Scientists are constantly working to solve problems in areas as diverse as medicine, agriculture, pest eradication and geology. In 1981, Australia began the world’s first community environmental movement, Landcare (1989).

Long before English colonisation, Indigenous Australians were already leading the world. Aborigines were first living in Australia about 50,000 years ago. Aboriginal people were the first peoples to use ground edges on stone cutting tools and the first to use stone tools to grind seeds, everyday tools which were developed only much later by other societies.
A unique Australian invention, the boomerang, had many uses and purposes. The genius and aerodynamics of the boomerang are one of humanity’s greatest inventions. The boomerang is known as an aerofoil, a surface which is designed to lift by making use of air current. A boomerang has the profile of a bird’s wing with the upper surface being greater that the one underneath. This characteristic produces a difference in pressure which generates lift when the boomerang is thrown through the air.

The woomera, a type of spear thrower, is another well-known hunting tool. The woomera, attached to a spear, propels the spear quickly over distance. Until the invention of the self-loading rifle in the 1800s, the woomera with spear was the fastest weapon in the world.

In modern times, Aboriginal people have contributed to Australia’s reputation as a nation of innovators. David Unaipon made significant contributions to science and literature and to improvements in the conditions of Aboriginal people. In 1909 he patented an improved handpiece for sheep-shearing and his many other inventions included a centrifugal motor, a multi-radial wheel and mechanical propulsion device.

Based on the principle of boomerang flight, Unaipon anticipated the helicopter as early as 1914. He gained a reputation at the time of being ‘Australia’s Leonardo’ for his promotion of scientific ideas and is commemorated on Australia’s $50 note.

Australian inventors have contributed to the health and well-being of millions of people around the world. In the 1940s, Howard Florey, a scientist from Adelaide, developed a way for penicillin – the world’s first antibiotic – to be manufactured and processed so it could be used to treat infections in humans. His work has saved literally millions of lives and means that today we are able to control most infections very easily.
More recently, Melbournian Dr Graeme Clark pioneered the development of the world’s first bionic ear – a miraculous device that literally lets deaf people hear. Dr Clark’s work has brought an extra dimension to and vastly improved the quality of life of over 50,000 people in 120 countries.

Dr Fiona Stanley, Australian of the Year in 2003, was part of a team of scientists who discovered the benefits of taking folate prior to and during early pregnancy. Her discovery has meant that there are far fewer babies born in the world today who suffer from spina bifida. Her research has meant that a very simple and low-cost prevention is available for most cases of this terrible condition – pregnant mothers need to ensure they eat a diet with plenty of folate-rich foods or simply take a vitamin pill each day.

Other important medical breakthroughs Australians are responsible for include the ultrasound (1976), which enables unborn babies to be monitored and doctors to look inside our bodies without the need for surgery.

In 1984, the first frozen in-vitro fertilisation baby was born in Melbourne, Australia, using a technique developed by Dr Alan Trounson and Dr Linda Mohr. Since then, many thousands of couples around the world have been born to couple who were previously thought infertile, thanks to this amazing technology.

Recent developments in nanotechnology by Australian scientists include a tiny machine (just 1.5 billionths of a metre in size) with moving parts only several molecules wide, which has been developed by a team of researchers at the Cooperative Research Centre for Molecular Engineering and Technology in Sydney. This nanomachine can be placed inside our bodies by doctors wanting to detect drugs or viruses in the blood, or to identify gene sequences for diagnosing genetic disorders.

Australian inventions have contributed significantly to travel and transport. Lawrence Hargrave began experimenting with the box kite in the 1880s and achieved the first powered flight in 1894 when he added a small engine to four box kites. Car radios were invented in 1924, the utility truck, or ute, developed in Geelong in 1934, the Victa mower (1952), inflatable escape slides used on aircraft (1965) and baby safety capsules (1984).

The black box flight recorder is one of our best known and most widely used inventions.

In the 1950s a number of airplanes had crashed and engineers could not find what was causing these planes to crash. Dr David Warren, a scientist at the Aeronautical Research Laboratory in Melbourne, came up with idea for a machine that would record the voices and instrument readings in the cockpit of an airplane. He thought that this information may give clues as to what happened to cause a crash.

In 1957, the first ‘ARL Flight Memory Unit’ was produced by Dr Warren and his team. The machine was developed further over the next couple of years and later models were housed in crash- and fire-proof boxes and sold to many countries around the world. Although this housing is usually bright orange, the machine became widely known as a ‘Black Box’.

After a crash of an aircraft in Australia in 1960, a judge ordered that all Australian airliners had to carry a flight recorder. Australia was the first country to make a ruling like this. Now every airline in the world has one of Dr Warren’s black boxes fitted to their aircraft and the data recorded by these machines has helped make travelling by plane one of the safest modes of transport.

The CSIRO, which fosters innovation, has a long record in the development of technological breakthroughs, and delivers scientific and innovative solutions for industry, society and the environment. CSIRO scientists lead Australian research across a number of different fields, and work with industry and government to solve problems such as using insects to tackle weeds, growing more sustainable crops and improving transportation.

Cooperative Research Centres, or CRCs, are another place where people are working on new inventions. A CRC is where scientists and industry work together. Some CRCs are looking at ways we can transfer data more quickly and efficiently. Others are investigating how we can apply new technologies, such as fibre optics, to current processes, such as seeing what is happening inside someone’s body without the risks of surgery.

Australia is also a nation of unsung heroes. For every scientist, invention or inventor, there are thousands of others you may never hear about. Called backyard inventors, these are the people who tinker in the shed and come up with novel ways to improve their lives or solve problems. Television shows such as The New Inventors offer a way for many of these backyard inventors to show the rest of us just how creative they are.

Did you know that all of these everyday items were also invented by Australians? first full-length feature film (1906)

Our lives wouldn’t be as safe as they are, or benefit from the conveniences we enjoy every day, without ingenious Australians. Next time you use a dual-flush toilet, write a message on your notepad, take antibiotics, buy a stamp, hang out the washing or take an aspirin to ease a headache, just imagine how different your life would be if it weren’t for the inventiveness of Australians.

Every year since 1901 the Nobel Prize has been awarded for achievements in physics, chemistry, physiology or medicine, literature and for peace. The Nobel Prize is an international award administered by the Nobel Foundation in Stockholm, Sweden. Australia has produced 14 Nobel laureates, which is the highest number per head of population of any country.

The list of Australian Nobel Prize winners also includes laureates who, although not born in Australia, spent a significant portion of their training or career here.

This works constitutes copyright of the Commonwealth of Australia and is licensed under a Creative Commons Attribution 3.0 Australia license– external site